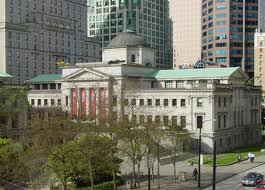 I don’t how long it might’ve taken me to visit the Vancouver Art Gallery if it were not my mom, who came to see our family for the first time in six years since we’d left for North America. The truth is that since my childhood the parents used to take me to all kinds of museums and expositions. Later, when I was working as an interpreter with Japanese I also used to frequent same kind of places — Tretjakov Gallery and Pushkin Museum in Moscow, Hermitage and Russian Museum in Saint Petersburg, etc., etc. Honestly, when you have to go there to do your job, it gets boring, so the museums in Russia lost their charm for me. Besides, art galleries in Russia follow the same pattern – statues from Greece and Roman Empire, then classic paintings from Europe and Renaissance, next French impressionism and modernism. There may be some Russian Church icons (religious paintings). And the collection ends up with cubism, futurism and the like a-la Malevich. Actually, I’m biased saying that I lost interest in museums: the Metropolitan Museum of Art in New York City impressed me a lot. Do have a look at the website: http://www.metmuseum.org/, and the same applies to the Boston Art Museum http://www.mfa.org/ .

Anyway, the Vancouver Art Gallery was a pleasant discovery. No classic stuff with Greek or Roman motives at all. There is nothing of European decadent tradition either. All the exhibits are exclusively from North America, and Canada in the first place. We ascended to the third level first of all. The whole floor there is dedicated to Emily Carr (1871 – 1945), who grew up in Victoria. She is considered modernist by the forms of expression, and a landscape painter by her method. Besides Canada, she studied in England and France and developed the modernistic touch. When she came back from Europe she was the first painter in Canada to discover the life of the ‘first nation’, thus started to paint about their culture – landscapes, people’s houses, totems, portraits, etc. And all her drawings carry vivid and bright colours – obvious influence from French modernists. Should you ask me if I liked Emily Carr’s pictures, h-m, I’d say that rather yes…

However, what I was impressed most of all was the second floor, – pop art of 50-70s. I think that the outline and arrangement of the exhibits was pretty gaudy and extravagant, but in the good meaning of the word. Paintings and sculptures are intertwined with furniture samples of 50-s and 60-s, and that makes you feel as if you submerged into the world of existentialism and decadence in a way, times of student protests with their declining of the bourgeois culture. Alas, those days are bygone by now. I’d strictly recommend to go and see this unique collection all by yourself. An adult ticket is 15 dollars, and if you come on Thursday evening between 5 and 9 p.m. it’s almost for free, just for a tiny donation, but check their website http://www.vanartgallery.bc.ca/home.cfm.

Next we go the first floor, where the collection of Andy Warhol, also a social protester (1928 -1887), is presented. This artist was a unique fellow in the world of art, so we can’t but write a couple of words about him (please refer to the site http://www.artchive.com/artchive/W/warhol.html ): «Andy Warhol began as a commercial illustrator, and a very successful one, doing jobs like shoe ads for I. Miller in a stylish blotty line that derived from Ben Shahn. He first exhibited in an art gallery in 1962, when the Ferus Gallery in Los Angeles showed his 32 Campbell’s Soup Cans, 1961-62. From then on, most of Warhol’s best work was done over a span of about six years, finishing in 1968, when he was shot. And it all flowed from one central insight: that in a culture glutted with information, where most people experience most things at second or third hand through TV and print, through images that become banal and disassociated by repeated again and again and again, there is role for affectless art. You no longer need to be hot and full of feeling. You can be supercool, like a slightly frosted mirror. Not that Warhol worked this out; he didn’t have to. He felt it and embodied it. He was a conduit for a sort of collective American state of mind in which celebrity — the famous image of a person, the famous brand name — had completely replaced both sacredness and solidity. Earlier artists, like Monet, had painted the same motif in series in order to display minute discriminations of perception, the shift of light and color form hour to hour on a haystack, and how these could be recorded by the subtlety of eye and hand. Warhol’s thirty-two soup cans are about nothing of the kind. They are about sameness (though with different labels): same brand, same size, same paint surface, same fame as product. They mimic the condition of mass advertising, out of which his sensibility had grown. They are much more deadpan than the object which may have partly inspired them, Jasper Johns’s pair of bronze Ballantine ale cans. This affectlessness, this fascinated and yet indifferent take on the object, became the key to Warhol’s work; it is there in the repetition of stars’ faces (Liz, Jackie, Marilyn, Marlon, and the rest), and as a record of the condition of being an uninvolved spectator it speaks eloquently about the condition of image overload in a media saturated culture. Warhol extended it by using silk screen, and not bothering to clean up the imperfections of the print: those slips of the screen, uneven inkings of the roller, and general graininess. What they suggested was not the humanizing touch of the hand but the pervasiveness of routine error and of entropy…»

When passing by the portrait Che Guevara, I stopped for a while, and the miracle occurred. The famous revolutionary descended from the portrait and commenced a conversation. “Mitch, do you know why my portrait is hanging here, in Canada, Vancouver?” – he asked strictly. “No, comrade Che,’ – I replied in a perplexed voice, bewildered. “You, dumbbells from Russia, you must be taught everything! Canada is the country, where we achieved the first stage of socialism, a dumbbell!” and went on: “We have medical system free of charge here!”  I said: “Well, but they say that they put you on a waiting list for a year or so if you need a surgery…”. “You, idiot”, — retorted comrade Che, — “In order to be healthy, you must go into sports. Do skiing or roller-blading, and you’ll never get sick!” And having said this, his image vanished. Still perplexed, I kept on circling among Andy’s pieces of art – pictures of Campbell soup, portraits of Marylyn Monroe, Mao Tse-tung, photographic negatives of shoes, etc., and kept to saying to myself: “What a cool museum! What funny things do happen here!”

Roller blades from Nike I bough three months after my miraculous encounter with Che Guevara. I still don’t know whether it was the legendary revolutionary who’d influenced me, or the art of Andy Warhol in general. Yet I’m pretty sure about one thing – the more healthier your life is, and especially in such a beautiful place like B.C., the better!

Thus, I wish good health to all of you,

And stay with Mitch